Donuts, we all love them. They are as individual as the person indulging in one. Everybody has their favorite and they don’t necessarily define breakfast, but more like a quick-grab sweet to be eaten any time of the day or night. Whether you consider yourself a master donut maker or a weekend warrior creating a small batch for the family, there are incredible donut-making machines on the market. If you have elevated your donut skills and passions to want to learn how to use a professional donut fryer, then you can begin here. 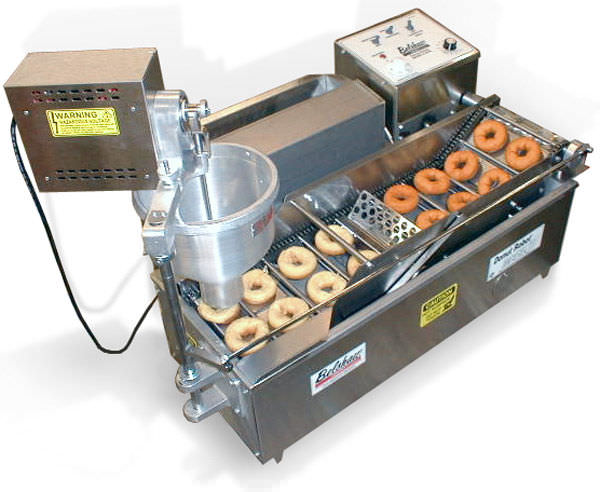 First, to be clear, there is a wide difference between a commercial donut fryer and a compact donut fryer. Commercial equipment for donut making produces huge amounts of donuts in little time. These machines are primarily used for making money off their fabulous donut recipes. A compact donut maker is for using at home or for small businesses. The compact donut makers are typically quite portable and easily manageable.

Any type of donut maker whether it is a commercial donut fryer or a small donut machine uses oil to produce those lovely concoctions. The simplest donut maker is a plain deep fryer and a great recipe. The next level up is fryers which come with a more complicated tray which is used to flip the donuts to ensure even frying. Commercial donut fryers hold a chamber that is used to make the dough and shape the dough — leaving in or removing the donut hole.

These extravagant set-ups are designed to complement the finished product such as a jelly-filled donut or a French Crueler. The unlimited ways to produce a quality and individual donut can be done with a commercial donut fryer, and sometimes at home with a compact machine, but a little more tedious and energy spent.

If you are seeking to open a donut business, you are going to want a quality commercial donut fryer. The technologies today for these high production machines are impressive. Most are fully automated and guarantee a high quantity output — on average around 450 donuts per hour.

The T-101 model is a side-by-side ‘line astern’ machine, which, in layman terms, means the donuts are dropped from the hopper straight into the oil and then gravitate down the carriageway by an automated paddle wheel.

Most professional donut fryers use this conveyor method and the “flip” method. While the donuts move along, they will bump against the flip doors. It is at this point an internal gear uses a slide arm to push the doors up and flips the donut. The donut will then fall onto a catch tray at the end of the machine.

When it comes time to clean the donut-making machine, they will have an easy dissembling method which involves removing a few screws and removing the oil carriageway from the tank. Oil filtration is an integral part of any type of fryer, allowing for a thorough filtering of oil through an external drain. This should be done every day.

For more detailed steps on cleaning out a fryer, refer to the operation and maintenance manual. Safety is always the first concern. Most professional donut fryers have a built-in temperature sensor when the oil level drops below the required minimum amount.

As you shop for a quality commercial donut maker, be sure to pursue only established brands and models. The research requires you to know what you are going to get for your money, as some brands are more reputable and reliable than others.

If you are interested in a compact donut fryer, the big hit right now is a little machine called the Nostalgia MDF200 Automatic Mini Donut Factory. This miniature donut maker will pump out about 30 donuts per batch. It will create perfect mini-donuts. The secret to using these smaller units is getting the batter consistency right.

Many people experience frustration with donut making machines due to misunderstanding how the dough thickness is the most important concept. Another frustration is when the donuts do not flip evenly or at all. This is due to improper oil levels, once corrected dozens of delicious little donuts will hit that catch tray.