Choosing one variety or the other will depend entirely on the amount of space available in your restaurant or commercial kitchen. The number of people that you’re making food for will also be essential for the selection of the right appliance.

Once you decide about one of the two main varieties, there will be a couple of additional features to think about. 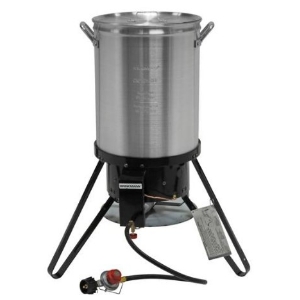 The oil capacity will determine the amount of food you’ll be capable of making with a single use of the fryer. A general rule of thumb is that countertop fryers have a smaller capacity than standalone units.

Most countertop fryers for commercial use have oil capacity in the range from 10 to 30 pounds. For standalone units, the range is from 30 to 100 pounds of oil. There are some smaller countertop units but these aren’t particularly suitable for use in a busy commercial kitchen.

The most common commercial deep fat fryers are either gas or electric.

Gas fryers have a heating system that consists of interconnected tubes going around the bottom of the appliance. They tend to be more expensive than electric fryers but it’s important to keep in mind that gas happens to be less expensive than electricity. Thus, a gas fryer can prove to be a much better investment in the long run.

Electric fryers are simpler and they’re powered just like the overwhelming majority of household kitchen appliances.

A general rule of thumb is to get a gas fryer, if the capacity of the appliance is to exceed 40 pounds of oil. Most standalone units work with gas.

If you want an electric deep fat fryer for commercial use, make sure that the appliance you’re interested in is Energy Star-certified. Commercial fryers that have the Energy Star certification tend to require 30 percent less electricity than other appliances. Such savings can be significant in a commercial kitchen that uses the fryer all of the time.

The recovery time is an incredibly important factor for commercial deep fat fryers. It refers to the amount of time needed to achieve the optimal cooking temperature after the food has been submerged in the oil.

Fryers that have a very long recovery time will get the food soggy and greasy rather than crispy. The heating technology, the energy input rate and the available controls will all determine the recovery time.

Gas commercial deep fat fryers tend to have a faster recovery time than their electric counterparts. This is yet another reason why such appliances tend to be more popular in commercial kitchens.

Ease of Maintenance and Cleaning

Appliances used frequently in a commercial kitchen should be easy to maintain in a good condition and clean. This is the final factor to focus on when choosing a commercial deep fat fryer.

While food is being fried, little particles will fall to the bottom of the appliance. When they stay there, the food particles will burn and cause a bitter taste. Commercial fryer manufacturers have found ways to address this problem.

When it comes to ease of use and maintenance, an oil filtration system is another essential. The system will automatically drain oil from the bottom of the tank, pass it through a filter and return clean oil that’s free from food particles.